Redwood Playhouse presents: An 80’s Dance party- in celebration of the 80 years 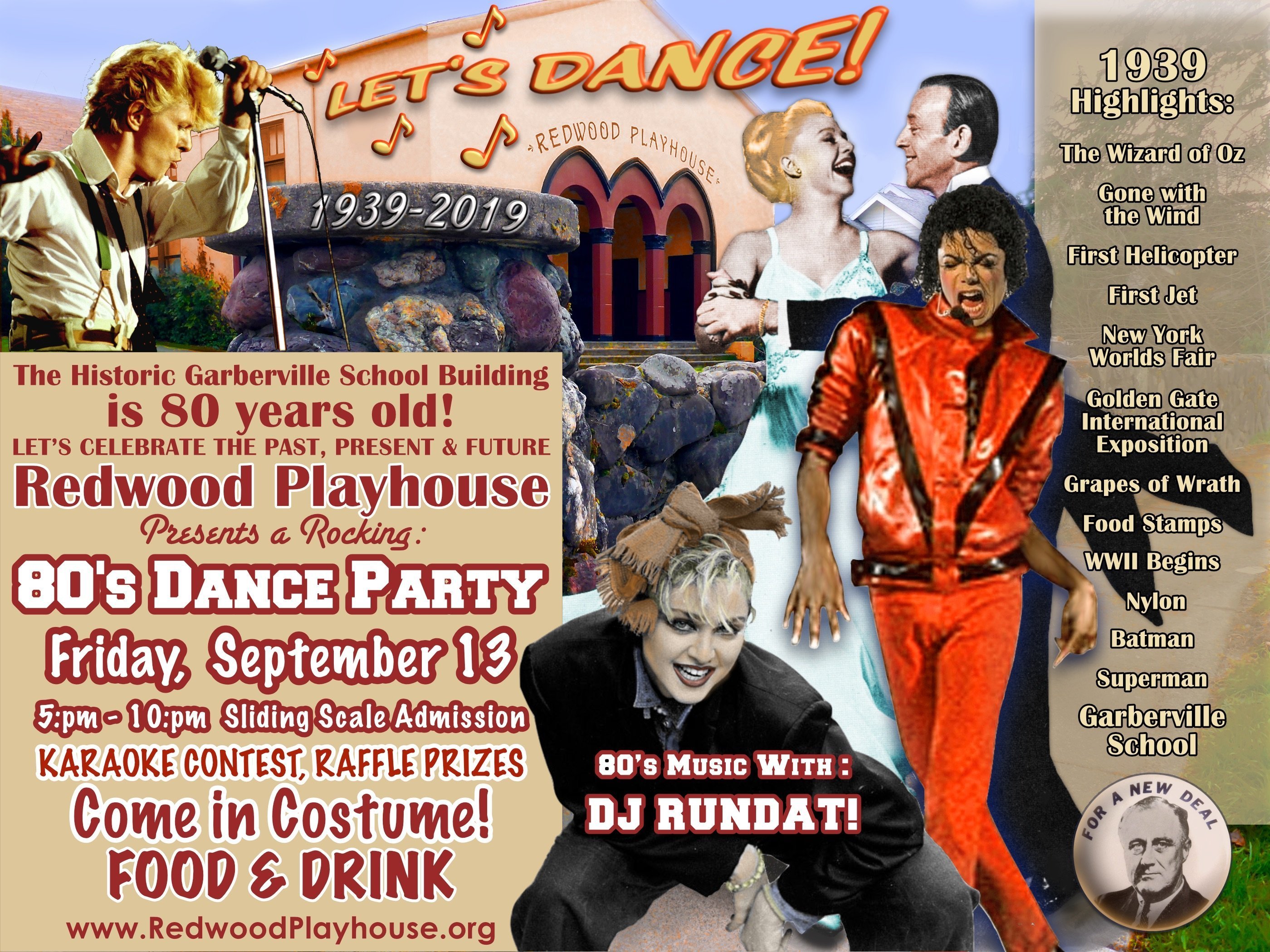 The Redwood Playhouse is celebrating!
Mark your Calendars — Friday, September 13th When we celebrate the 80th anniversary of the completion of the historic Garberville school building.

80 years is a lifetime, and this past generation has been like no other.
We will celebrate the past, present, and future by meeting halfway and hosting an 80’s Dance party!
with Karaoke competition- Come in costume and practice your favorite 80’s hit.
Food, drink and raffle prizes, with 80’s classics provided by DJ Rundat.
With a sliding scale admission, no one will be turned away for lack of funds.

In 1939, the Darkest days of the “Great Depression” were behind us. “Gone with the Wind” and the “Wizard of OZ” were on the silver screen, The New York Worlds Fair was opening, and a new Hero named “Superman” was born.
Meanwhile: in the small unincorporated Northern California town of Garberville President Roosevelt’s Federal Public Works Project was building a new school.

The Architect Franklin T. Georgeson, born in San Francisco in 1889 never allowed himself to forget Humboldt county or Eureka, the city where he was reared, the eldest son of former mayor Fred W. Georgeson, he achieved professional distinction during his time in Los Angeles and San Francisco and designed many public buildings, relocating to Eureka in 1912, he designed the Humboldt County exhibit at San Francisco’s Panama-Pacific Exposition in 1915.

The Garberville school building, is in the Mission revial/neo-classical style with cast cement facade details that include Moderne stylized geometric spirals on the North entry frieze, and a dramatic triple arched vestibule on the great hall. The building was recently added to the Living New Deal Project A crowdsourced non-profit project with researchers hosted by the Department of Geography at the University of California, Berkeley which seeks to document the legacy of the “Greatest Generation.”

New Deal projects covered the whole country.  No city, town, or rural area was left untouched. Hundreds of thousands of roads, schools, theaters, libraries, hospitals, post offices, courthouses, airports, parks, forests, gardens, and artworks were created in a single decade, 1933-42, by our parents and grandparents.  Not only did they improve and modernize the country back then, most are still in use today.
This town landmark was restored and modernized by the College of the Redwoods in 2009, and this year was acquired by the Southern Humboldt Community Healthcare District, which plans to use the former playing field as the home of their new emergency room and clinic.

The Redwood Playhouse has operated as a non profit since 2013 with goal of supporting performing arts that inspire, educate and empower our community. The building is also the home of Senior Life Solutions, an intensive outpatient group therapy program designed to meet the unique needs of adults over the age of 65 with symptoms of depression and anxiety, and the Garberville Community School, a public, alternative school serving grades 7-12.
.